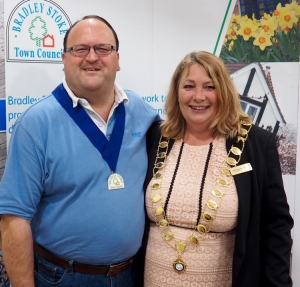 At Bradley Stoke Town Council’s Annual General Meeting held on Wednesday 11th May 2016, Councillor Elaine Hardwick was elected to the position of Mayor of Bradley Stoke.

The outgoing Mayor, Councillor Roger Avenin, welcomed everyone to the meeting and explained that it was his pleasure, as his last action in the role of Mayor of the Town, to present cheques to the two recipients of the Mayor’s Charity.

A total of £7,275.30 had been raised over the past year to be split between the Age UK South Gloucestershire Branch and RSPCA Bristol & District Branch, both receiving 50% of the total, amounting to £3,637.65 each. Representatives from both groups accepted the cheques.

Upon Councillor Elaine Hardwick’s election to the position of Mayor, she thanked all councillors for her nomination and then took the Chair of the Meeting, after signing her Declaration of Acceptance of Office as Chair. She thanked Councillor Roger Avenin for his marvellous work as Mayor during the past year. She then announced that her two Mayor’s Charities for 2016/17 will be Heartful Dodgers and Transplant Sport UK.

Councillor Elaine Hardwick has been a sitting councillor in Bradley Stoke since 2011 (currently representing the Woodlands Ward). 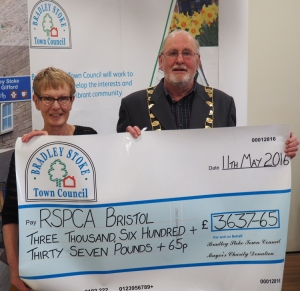 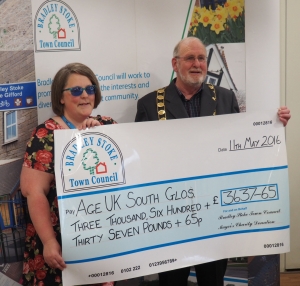